Scoliosis affects 1 to 2% of all teenagers and 50% of people over 60. Most people think of scoliosis as an “S-shaped” curve in the spine, but it’s actually not. It’s really a three-dimensional corkscrew twist of the spine, that appears “S-shaped” on a front to back x-ray. Depending on the degree of the curve, scoliosis can cause constant discomfort or constant pain, because the twisting of the spine causes muscles to pull and become chronically tight.

The two most widely-used methods of treating scoliosis are bracing and surgery. Studies show that there are problems with each of these treatments. 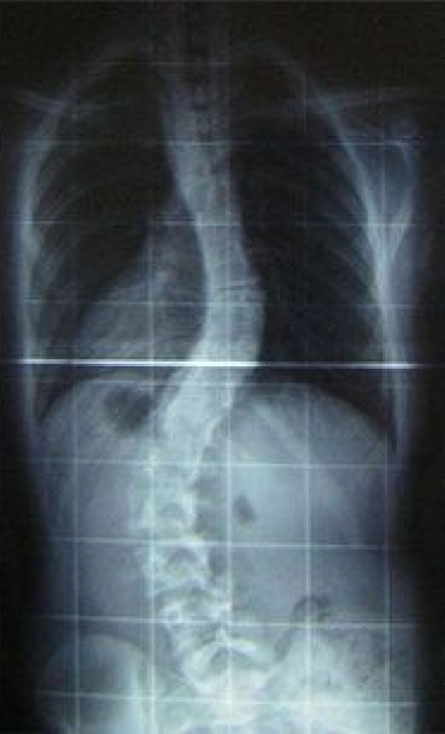 To be most effective, a body brace must be worn for up to 23 hours a day, and most of them are rigid, very uncomfortable, and designed only to prevent the progression of the curve. There are new flexible braces which may be more comfortable and may help to lessen the curve while wearing the brace, but I have not seen studies showing that these provide better results long term. More importantly, braces try to force the spine to the side in an attempt to correct the curve. They do not acknowledge the twisting nature of the spinal curve nor do they try to unwind the twist. As a result, they achieve a fairly minimal correction. A recent study (J Pediatr Orthop. 2010 Sep;30(6):531-8.) noted that only about 60% of adolescents in the study achieved a 5 degrees or less progression of their curve using a brace.

Spinal surgery typically uses rods and screws to force the spine into a straighter position. Again, this does not unwind a twisted spine, and will not restore normal posture. One meta analysis (J Pediatr Orthop B. 1998 Apr;7(2):111-6.) found that “No instrumentation [rods and screws] demonstrated a consistent ability to restore a normal thoracic kyphosis [the normal curve of the mid-back]…”
Plus, another meta-analysis (Neurosurg Focus. 2010 Mar;28(3):E3.) showed that spinal surgery for scoliosis brings a more than 40% risk of complications. The study states that “Incidence of perioperative complications is substantial and must be considered when deciding optimal disease management.” The rods and screws also reduce spinal mobility, which can lead to chronic muscle spasms later in life.

I have found that a special chiropractic technique called Advanced Biostructural Correction, or ABC (www.ABCMiracles.com) has great success with scoliosis patients – reducing their symptoms and improving their spinal curves. ABC is very comfortable and usually brings rapid relief within 3 to 7 treatments. After that, regular adjustments will maintain symptoms at a low level and aid in progressively reducing the curve over time.

ABC works on the principle that the spine, like the rest of the body, is self correcting – but only to a point. If a vertebra gets rotated to one side, there are muscles on the other side of the spine which can pull it back to center. But if a vertebra gets pushed forwards, towards the front of your body, there are no muscles behind the spine which have the force and leverage to be able to pull the vertebra straight backwards again. So these vertebrae just stay in a forward position. This tips your body forwards and causes what we commonly call “bad posture.” This explains why we see everyone slumping more and leaning forward more as they get older.

When the spine gets twisted in a scoliosis, the main spinal misplacements that need to be corrected are the vertebrae that have been pushed forward, because those are the vertebrae that the body is unable to fix by itself. We correct those forward vertebrae with ABC, and posture is immediately improved, even after one adjustment. Pain is also immediately less, because the body is now aligned better, and the muscles are no longer pulling as much as they were.

Here’s another story, from a patient who visited another ABC doctor in Michigan. This patient was treated with a back brace as a teenager, but still had debilitating pain years later.

“My name is Jamie R.; I am 20 years old and I was first diagnosed with scoliosis when I was 12. I had a 35 degree S-shaped curvature that curves to the left near my shoulders and to the right near my pelvis. My scoliosis was not immediately obvious because my spine compensates for itself by twisting one way and then back to the other.”

“Several of my doctors say they would like to have caught my scoliosis at a younger age while I was still growing – I was already 5’7″ at age 12 and am about the same height right now. But, despite the doctors’ regrets, I am very glad my scoliosis was not detected until 8th grade. I never had any back pain or trouble with the condition until after they started treating me. In middle school, I ice skated, took tap, jazz and ballet, and played the piano and saxophone without problems. When I brought up this point in a recent conversation, my orthopedic surgeon retorted that that eventually I would have had much worse back pain than I have now if he had not treated me the way he did.”

“…I ended up seeing two orthopedic surgeons throughout 9th grade who convinced my parents and me that I needed to wear a brace. They said I was ‘fortunate’ that the curvature was not quite 40 degrees because they would have recommended corrective surgery in the form of metal screws in my spine. The thought of surgery made me leap for the brace, which I was supposed to wear for 23 hours a day for two years straight.”

“I wore the brace to school under my clothes but to be honest, I cheated during field hockey and at home. Wearing the brace gave me some of the worse pain I have ever experienced and I spent a lot of my time lying flat on the floor with my feet propped up on a chair. My skin was always bruised from the force of the brace. It was hot; I had limited mobility. I was miserable all over. In addition to this awful back pain, I started developing other problems in my knees and ankles that made it difficult to walk. My back pain has progressively gotten worse since I stopped wearing the brace about six years ago. However, my orthopedic surgeon still considers my case to be successful because my curvature was corrected from 35 degrees to about 29 degrees.”

“When I first went for Advanced BioStructural Correction™, I could hardly stand for more than a few minutes without shifting around in pain. In fact, sitting was often just as uncomfortable. I have spent the last few years sitting, standing, sitting and moving back and forth because no position was comfortable for my back. Walking long distances gave me pain in my back, hips, knees, ankles… I can feel all this changing since starting ABC™. [The doctor] has shown me that fixing my spine is not as simple as throwing a brace on and forcing it into place. ABC™ is correcting my spinal curvature as well as the muscles in my back that have begun to degenerate from years of misuse. It’s a completely different approach to treating scoliosis than what I’ve been accustomed to.”

“This is the first time in a very long time that I can sit comfortably, something that should be simple for anyone. I know that I still have at least another year to go before I am ‘cured’ but I feel great with the progress we have made. And, the muscle scans [the doctor] has done are proof that the ABC™ method is working. It really is a shock for me to look at the scans from April compared to my most recent scans in July. I am so happy I found this practice when I did because it has taken away a lot of my pain and improved the quality of my life.”

“I hope my story helps you in your decision about how to treat scoliosis. Get Advanced BioStructural Correction™…
Sincerely,

If you have scoliosis, please come in for a free consultation. I will examine you, look at your x-rays, and give you an honest evaluation of how much I can help you. If you know a teenager with scoliosis, please bring them in for a consult. ABC is extremely effective and fast-acting for young spines, and can make an enormous difference in their future lives.

I look forward to meeting you and helping you.